I'm not sure if I should worry that we are leaving in 7 weeks and I've only ridden my motorcycle once.  I took it out to the post office and to visit my parents late last week.  We are planning on riding a bit later today as well.  Time to get back into the swing of things.

Steve bought some sheepskin and put in some grommets so we can secure it to the bike, so there will be some extra cushion on my seat.  I find that my backside often has the most difficulty acclimating to many hours of saddle time.  Yesterday he also installed supplemental LED brake lights on both bikes.  Pictures of both are below.

The idea of getting out on the open road is quite romantic  Just leave all your worries behind and enjoy the ride.  Nope.  Not going to happen.  I'm not there yet.  I'm bound to my technology and it is one of the main areas we are investing in prior to this trip.

First, it started with the spot locator which arrived this week and Mom kindly offered to pay for.  Yes, I'm 40 and can pay for it myself, but what she is really buying is her own peace of mind. I did not grow up in a motorcycling family, so when I started riding in my 20's my Mom was very accepting, but that doesn't mean she's thrilled about it.  So, we have a deal.  No matter where I am, at the end of every day I call her and let her know we are safe and we are off the bikes for the rest of the day.  Whether it's a call after a quick ride to lunch or from the hotel near the Matterhorn in Zermatt, Switzerland, she appreciates it.  I've even called her after a ride that she didn't know I was going on.  It's just a thing we do now.  It's never my goal in life to cause her stress, so if a quick phone call will put her mind at ease, I'm all for it.

Now for a ride of this scope, there is obviously an intensified sense of worry.  The spot locator will allow me to send her a message via satellite that will basically tell her that we are safe but we have no cell service.  It will also allow her to track our progress as we make our way across the country.  Anything to keep in touch with not only her youngest but her only daughter....and I'd like to think favorite child.

It also has this nifty feature where if we get in real serious trouble we can hit a button and the spot locator will call for emergency services to come to our aid.   Hopefully, we will never have to use it but I think we will feel better having it.

Second, came talk of the communicators.  Our new helmets are set up to hold the blue tooth communicators.  So the idea of being able to speak to one another is appealing, although it may get old fast.  In the past I did not think it was necessary.  If I wanted to pull over I either passed Steve and stopped, or I would just stop and eventually he would figure it out and turn around.  But I guess it will be nice to be able to chat.

Steve will also be able to hear his GPS and music (I'm not really the music listening type while riding).  I like the ability to receive phone calls, although I wouldn't make a habit out of it.  I think we are going with a Sena, but unfortunately the newest model won't be available until May 12th...so that is going to be a late arrival.

Third, was the laptop.  We have a cheapy, clunker of a laptop.  It does what it's supposed to do, but is not all that compact.  My home desktop runs Windows XP which will soon no longer be serviced by Microsoft, so I was planning on getting a new desktop.  But I have recently (like literally just last week) started working full time from home so my previous office desktop is now in my home office.  So instead of replacing my personal desktop we decided to replace the laptop.  I can hopefully log onto my day job if need be.  It will also allow us to log on and print out the HVMP shipping labels so my trusty bro-in-law can run the business while we party.

We bought this very lovely Lenovo Yoga which has a solid state hard drive (Steve says that is more better) and is kind of half tablet, half computer.  I have all of my Microsoft Office programs that I may need for work stuff, but it can be folded and is touch screen and has apps and is super light and I'm trying to figure it all out along with Windows 8.1.  I will say the Microsoft version of the Blogger app is crap.  You can only read blogs not edit your own.  I have to go on the internet to do that.  On my I-phone Blogger app I can write new blogs (which is also more better).

OK, so now we can talk and message Mom, call an ambulance and fire truck, listen to tunes, get directions, have conference calls, create spreadsheets, argue with one another and keep up with Orange is the New Black on Netflix.  Not very Easy Rider of us.  There was still one missing piece.

Fourth, and hopefully last, is today's latest purchase.  My own wifi hot spot doodad widget.  This contraption can supposedly connect to 2G, 3G, 4G, etc. and then make a wireless haven for up to 10 devices.  I have no idea how it will work, but I'll report back once I know.  It was a simple add to my wireless plan.

Steve is in charge of making sure everything can be charged on the bikes while we ride (except the laptop, that will wait for hotel time).

My feelings are mixed on remaining so connected.  I do hold on to this fanciful notion of life on the road.  The idea of feeling free spirited, wind blowing through my hair, grit in my teeth and maybe even little smelly is wholly appealing.  But, as a product of a responsible family I have been generally well-behaved and stayed on a path of being both dependable and accountable.  Going on a month long motorcycle trip is as bad-ass as I get.

Although, who am I kidding?  I'm writing a freaking blog. 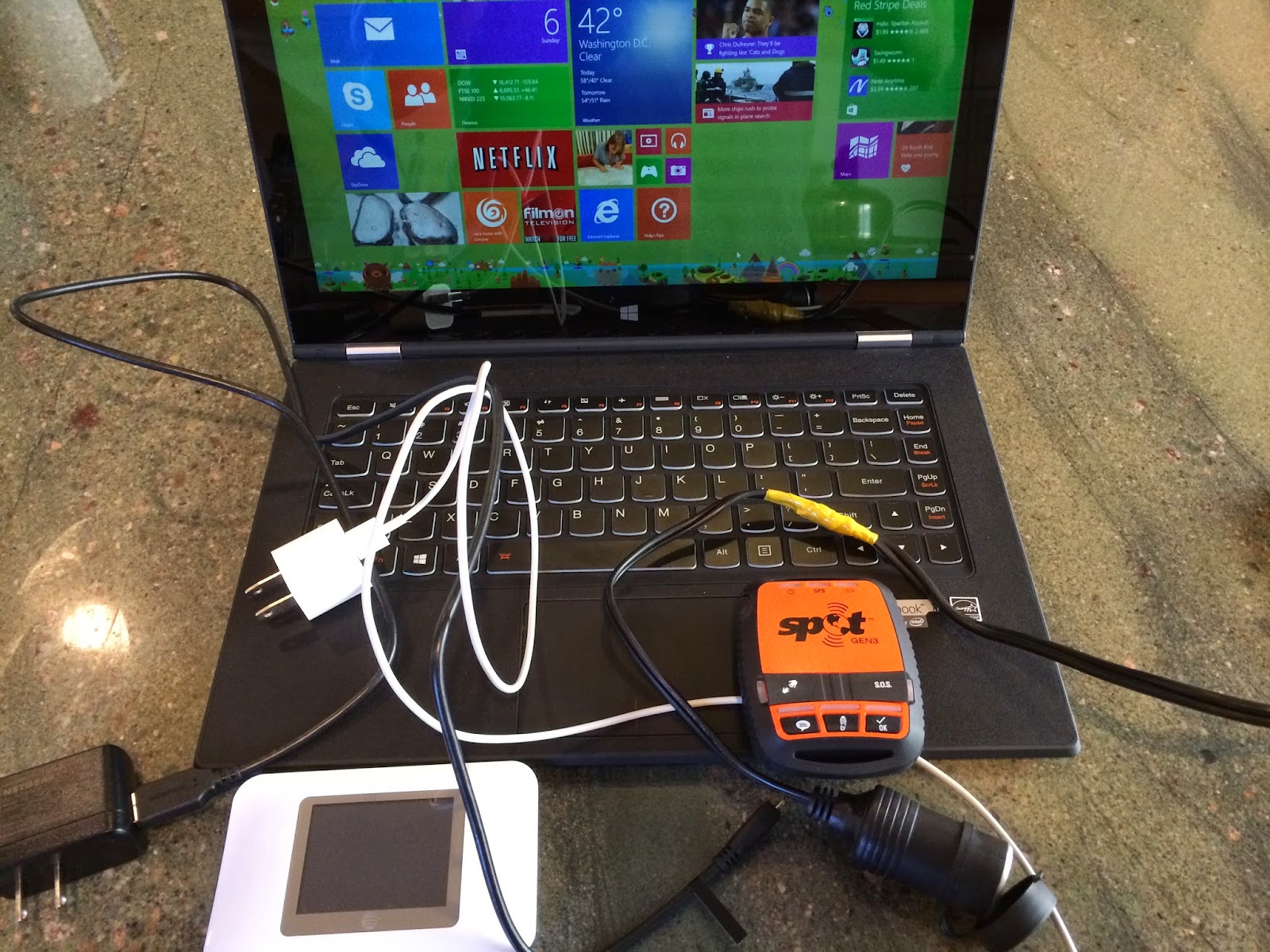